History Of Chess in our State 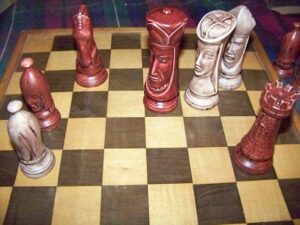 Karnataka State Chess Association with K Saiprakash at his helm bustled with activities in the early 1980’s with special emphasis on encouraging on women’s chess. In 1974 Saiprakash organized India’s first ever national women’s chess championship which was won by Vasanti Khadilkar. In 1978 Bangalore got the KSCA to organized the FIDE women’s zonal with Jayashree Khadilkar won to become the India’s 1st WIM. In 1982 he turned his attention to organize the inaugural national sub-junior girl’s chess championship in the name of the Chikkamagalur district chess association.

How difficult it was to attract the girls in this chess tournament. Could be guessed from the fact that at the first national sub juinor girls chess championship in chikkamagalur, there were totally only 8 entries, and none of them from Karnataka ! Here too despite the participation of 2 girls who went on to become WIM in later years, it was Gargee Chandrasekhar Mohapatra from Orissa who took the title with 5/5.

In Bangalore: The Victor Simon open held at the YMCA bangalore was organized on the heels of the national teams chess championship. It was not won by the favorites, but by two unknowns who scored 5 pts each in a 6 round Swiss League. It was won jointly by P Gopalakrishna of South Canara and V Subramanian of Chennai who is now publishing Chess books. Half a point behind them were 4 famous players in a bunch,. Raja Ravishekar, N Sudhakar Babu, J Katdare, and N Neelakanthan. To celebrate the silver jubilee of the Karnataka State Chess Association, the first leg of the Karnataka 25 circuit called the “Hampi Chess Congres” was organised in stlye by the Bellary district chess association during April 1982 in the Tungabhadra dam in Hospet. Fancied players won easily, drawing among themselves. Top placed was Raja Ravishekar, followed by D V Prasad and T N Parameshwaran.

Karnataka Chess has history is very vast and have been a number of tournaments held in Bangalore since 1975 – 1995 and onwards till date, Karnataka has produced many naturally talented and strong Chess players in this arena, the players with modern touch are 5 time State Chess Champion N. Sanjay, multiple times state chess champion and National A player Aravind Shastry, IM B S Shivananda, IM M.S Thejkumar, IM G.A Stany, World U-10 Champion Girish Koushik, Commonwealth medal winner Viani D’Cunha, former State Chess Champion Y.G. Vijendra and to name a few amongst chess fraternity who had contributed towards Karnataka shine at nationals. All these players made their foot prints at the National level and Open FIDE rating chess tournaments also.

Apart from the active chess across all the districts in Karnataka, we have also our proud International Arbiters and FIDE Arbiters who made their presence in almost all of the India’s strong events like Common Wealth, GM open tournaments, National B and many other All India FIDE rated events to ensure smooth delivery of the tournaments and made it successful.