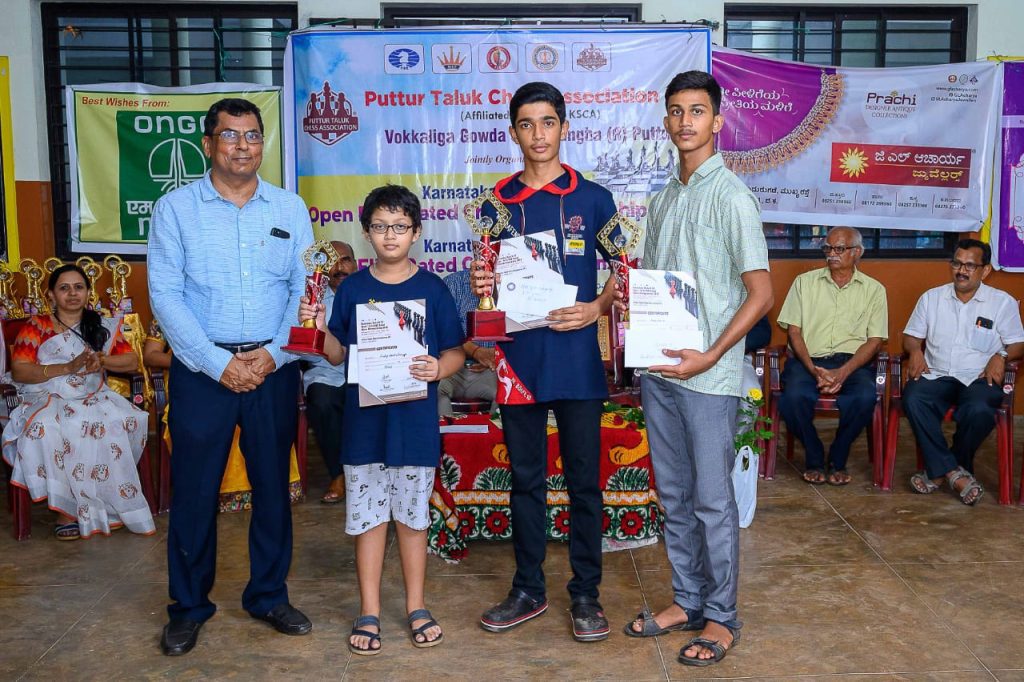 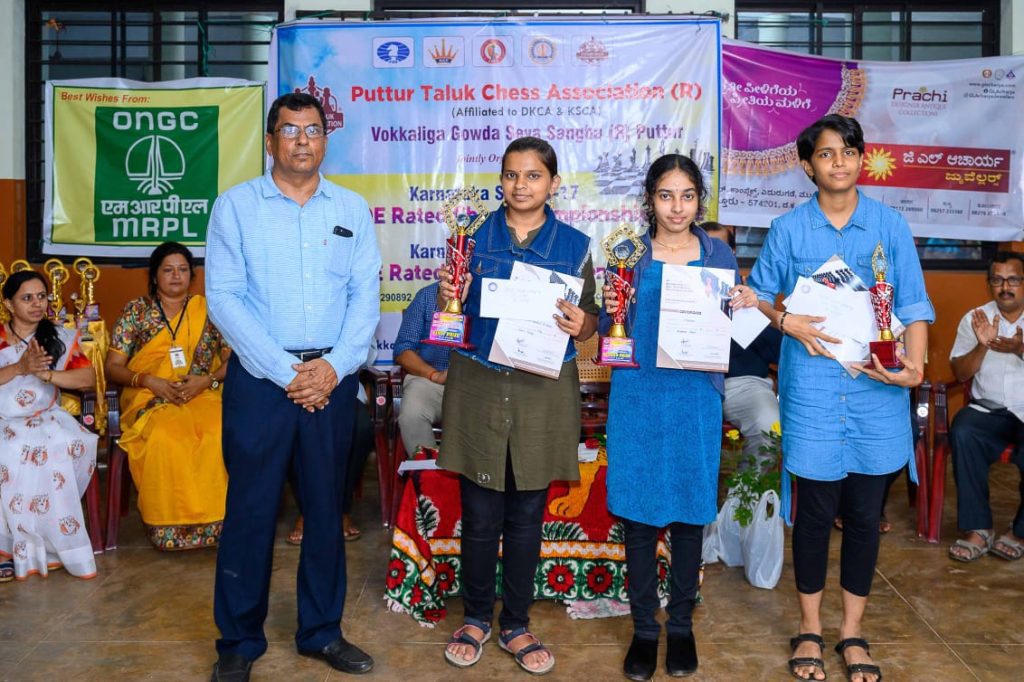 Puttur Taluk Chess Association are the proud organizers of this Championship. It is organized under the auspices of KSCA, AICF and FIDE. Mrs. Uma D Prasanna was the chief Co coordinator of this event. The event was spread over 3 days and consisted of 9 rounds. Each day there were 3 rounds.
The inaugural ceremony was presided by Sri. Chidananda Ballady, President Vokkaliga Samudaya Pathina Sahakari Sangha, Puttur. Sri Sanjeeva Matandoor, Honorable M L A, Puttur, inaugurated the event by playing the inaugural move on the board. Other dignitary present on the dais was Sri Balarama Acharya, G L Acharya Jewelers, Puttur.

Karnataka State U 17 Open FIDE Rated Chess Championship 2022 was won by Dhanush Ram 1532. He scored 8 points out of 9 and remained undefeated with 7 wins and 2 draws against Pankaj Bhat in the 8th round and Manvith Kanajalu in the final round. Second and Third Positions went to Manvith Kanajalu and Aradyo Bhattacharyya respectively. Both scored 7 points.

Karnataka State U 17 Girls FIDE Rated Chess Championship 2022 was won by Swaralakshmi S Nair. She scored 7 and half points out of 9 and remained undefeated with 6 wins and 3 draws. She drew with Drishtee Ghosh in the 3rd round, Rudra Rajeev in the 7th round and Disha U A in the 8th round. Second and the Third Positions went to Manasa and Disha U A respectively. Both scored 7 points each.

The tournament hall for the Karnataka State U 17 Open and Girls FIDE Rated Chess Championship 2022 was spacious and could accommodate all the players very comfortably. The playing hall was well decked up for the Chess Championship and was very neat and clean. The hall was very well lighted and also air conditioned. The washrooms were on one side of the playing hall and were kept in a hygienic condition. Safe drinking water was provided to the players. A lot of comfortable space was provided for parents, guardians and managers to sit in adjoining halls.

Mrs. Uma D Prasanna, President PTCA herself and her team of efficient officials helped in organizing the Karnataka State U 17 Open and Girls Chess Championship 2022 successfully. The officials of the Puttur Taluk Chess Association were always around helping the participants, parents, managers and coaches for all their needs. Lunch on all days was provided to players as well as parents free of cost by the organizers. For refreshment, food stalls were provided for all.

14 New FIDE IDs were created in this Tournament. Thanks to Mr. Gopa Kumar M S, Rating Officer, AICF for the timely and quick response in creating the FIDE IDs for the new unregistered players of this championship. There were no disputes or protests filed by the players. All in all, the perception of chess among the participants, the spectators and the people improved by the wonderful organisational skills displayed by Puttur Taluk Chess Association.

During the Chess Tournament the work of all the Arbiters was up to the mark and a Norm certificate was given to Babu J Poojary, Deputy Chief Arbiter. Mrs. Soundarya U K, National Arbiter from Karnataka was the other arbiter. Their wonderful performance greatly contributed towards making these Championships a great success.